Hades Tattoo meaning, symbols and more on this complete guide

Today we want to follow up with more Greek mythology tattoos.

In the past we wrote for you another guide about Ares Tattoo, but today is time for Hades Tattoo, the underworld God for Greeks.

So, this is what you are going to find on this guide: 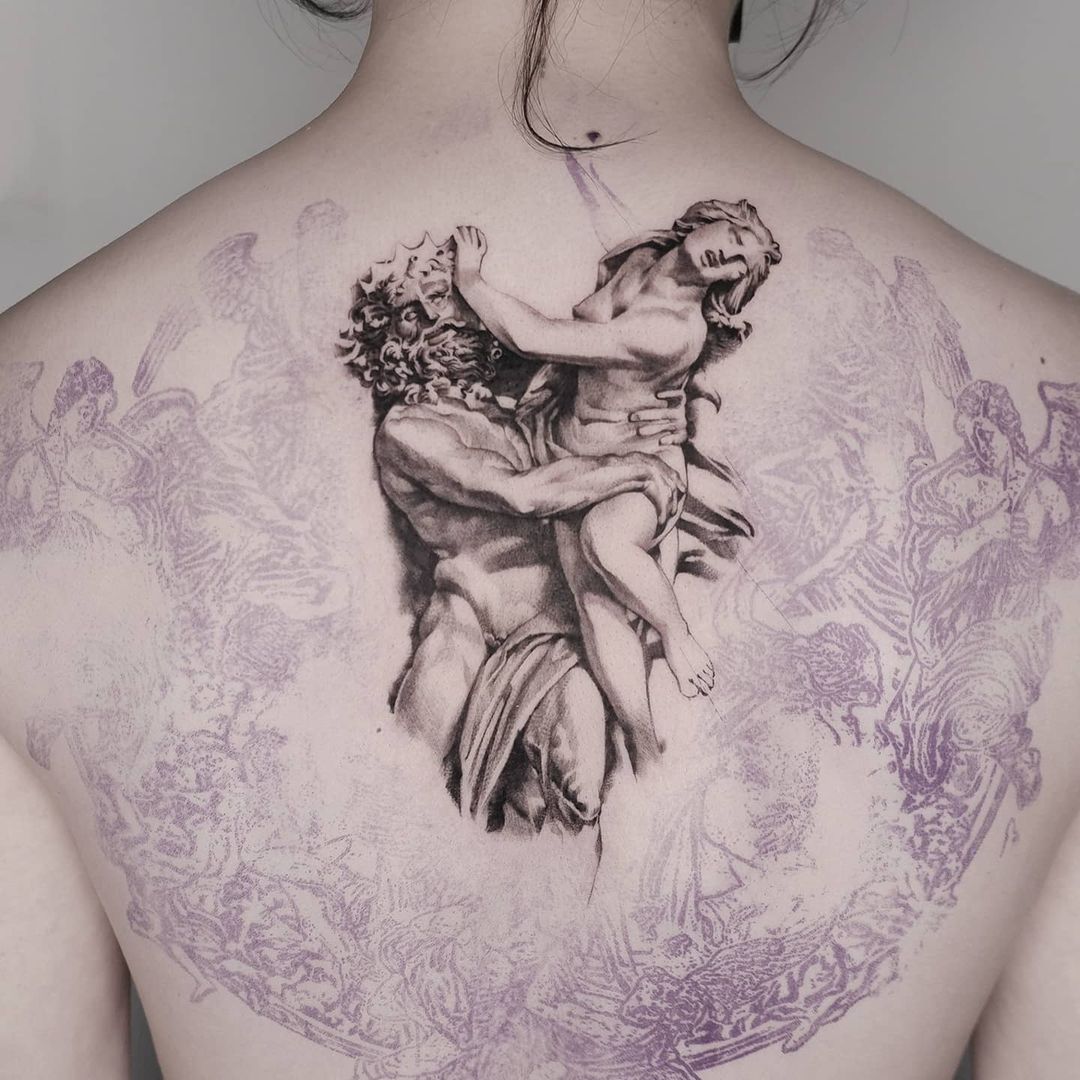 Well, this is the main myth for Hades, with a lot of symbolism itself, moreover, a fantastic tattoo.

This tattoo, made by our beloved Hwi, is a representation for the baroque sculpture “Proserpina (or Persephone) Kidnap”, from Lorenzo Bernini.

The sculpture is from 1622 and is one of the best sculptures you can see in the world.

About the tattoo, this is just a masterpiece, the moment is captured with all the intensity and the strength the sculpture has, made in a realistic style, just perfect.

Hwi is a fantastic tattoo artist from Seoul, in South Korea you must follow for sure!

First of all, who was Hades?

Hades was the Greek God for the underworld, in other words, the place where all the Greek’s souls went once they died, named Pluto for the Romans.

We can say Hades was the most feared God of all and, in fact, Greek people usually don’t name Hades, at least, in public.

But Hades’ history is very special, with a lot of symbolism.

Hades (kidnap and) married Persephone and his main symbol was the scepter or the cornucopia (a type of horn) with a lot of things inside, representing the soil is fertile and rich.

But, how did Hades become the Underworld God?

Well, this part is going to surprise you.

There were 3 brothers: Zeus, Poseidon and Hades, as the 3 main deities for the Greek people.

They defeated the titans and the giants, and then, they have to decide who of them is going to rule what part.

So they just flip a coin to see it.

And, because of this, Zeus was the God for the sky, Poseidon for the seas and Hades for the underworld.

Because of this, Hades was the only Greek God not living in the Olympus, instead of that, he was on a dark and lonely palace inside the ground. 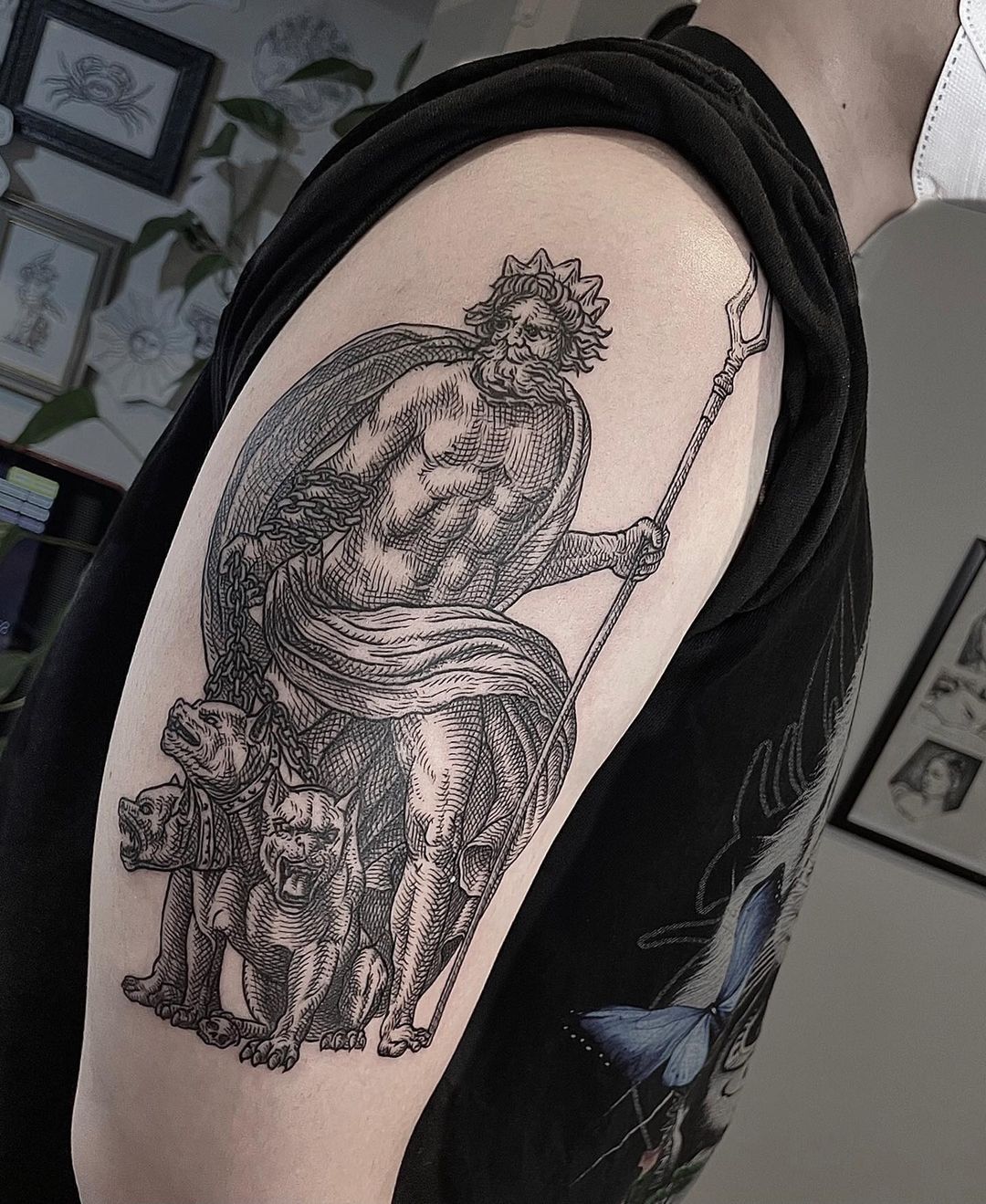 This is another nice example of a Hades Tattoo, as the main character of the composition, accompanied by Cerberus, the dog at the gates of Hades Kingdom.

Later we are going to introduce you to Cerberus’ character, don’t worry.

The tattoo itself is made by Eleven Muse Tattoos, a private tattoo studio in Bangkok, in Thailand.

We do love the tattoos from Eleven Muse with this carving style, because we think it is really special.

A couple of Hades’ myths

We want to introduce you to the main 2 myths for Hades.

First, the main task for this God, and then, how did he marry Persephone.

Hades task for today: He has to collect and maintain all the Greek souls, and this is a big deal!

But, what happened for a Greek person when someone died?

Well, first, they have to reach Stygian lake, led by Hermes.

Then, they will cross the Stygian lake in Caronte’s boat, paying with a small value coin.

Caronte will lead the Greek person’s soul to the Hades door, and there, Cerbero, a dog with 3 heads and snakes in the body was guarding the entrance, so none can escape.

Before entering, there were 3 judges, Minos, Radamantis and Éaco. They judge the life of this person and: 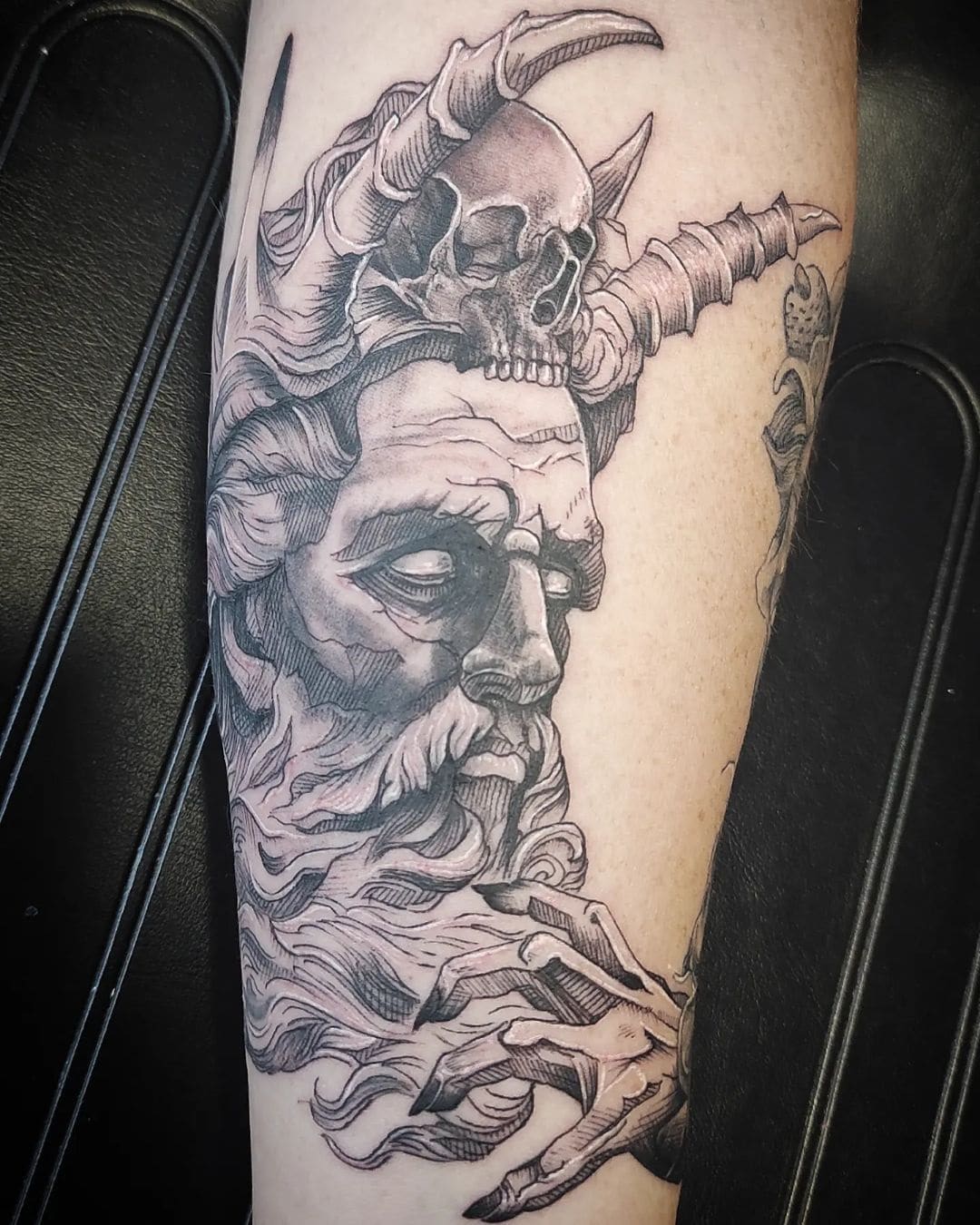 This time you can see a tattoo about Hades’ character, a portrait with a different helmet.

You know, sometimes Hades’ symbol as the God for the Underworld is a little bit creepy, and it is not weird to represent him with skulls and horns, like this one.

The tattoo is made by Mikl Tattoo, from France, in a realistic style with black and gray ink, and, as you can see, Hades is usually represented as a serious guy.

How this Hades marry Persephone

Hades fell in love with Persephone, the daughter of Zeus and Demeter, so he decided to kidnap her to the underworld.

Hermes notices that and he asks Hades to bring her back, but Hades basically answers that none can escape to the underworld.

Finally, all the gods decide Persephone can leave the underworld only if she does not eat anything there.

So Hades cheats Persephone and she eats only one grenade seed.

So, they all decide Perfephone can go out the underworld half of the year, and the other half she has to stay there.

This symbolizes the winter and the summer, and, more specially, the harvest. 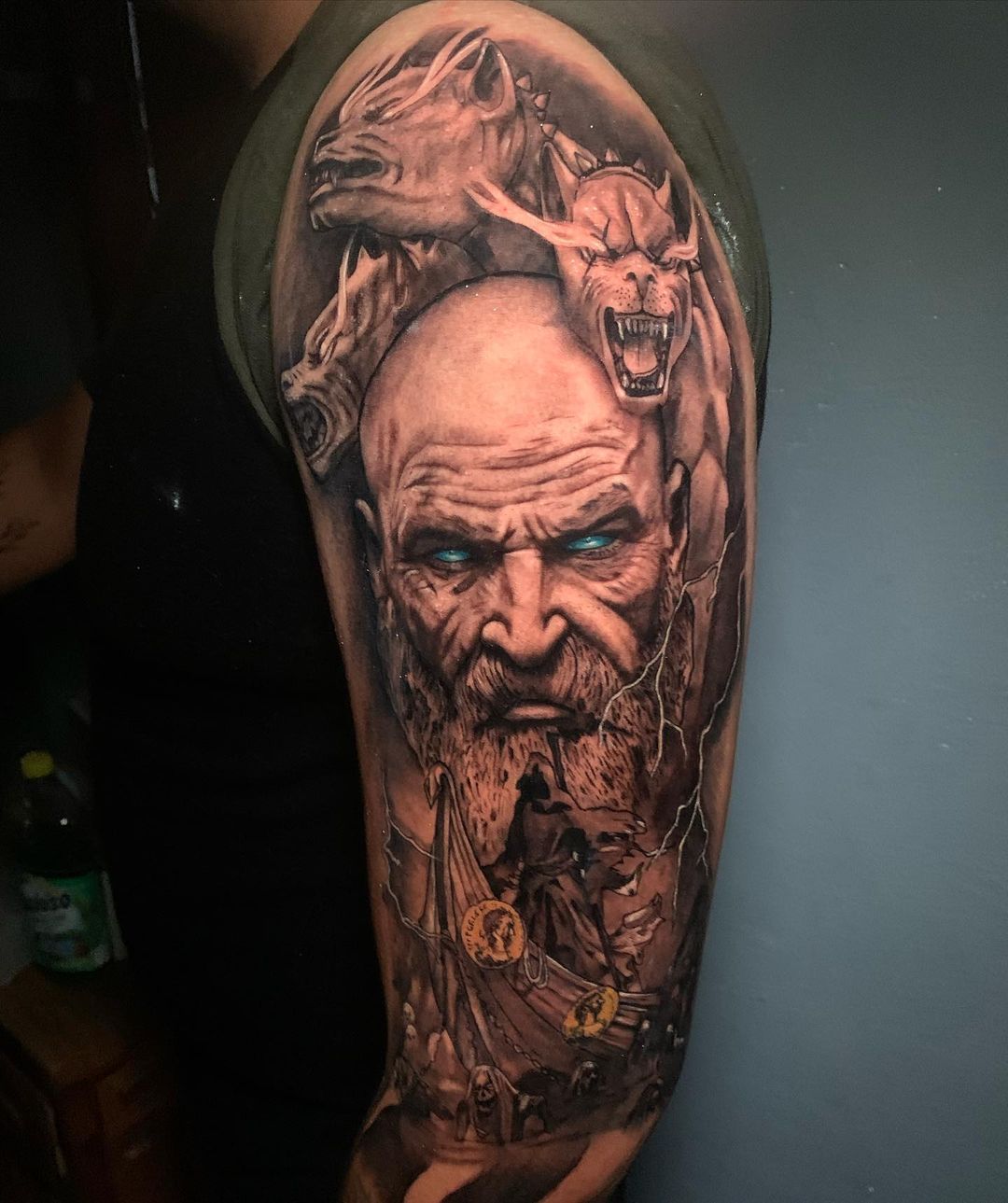 Hades and the underworld crew!

We do love this tattoo for several things, but mostly for two:

First, the tattoo is a masterpiece, perfect definition, bold design, harmonic composition and everything we can say about it is fantastic.

Secondly, because it represents the main 3 characters in the Underworld for Greeks:

The tattoo is made by Rafael Chavez, from Mexico, and this is a fantastic piece of work!

As you can see, Hades is a very strong symbol himself, but you can get tattooed with some of his symbols instead of the main character, giving you more flexibility.

First symbol for Hades is the helmet, as you can imagine, a magical one.

Hades’ helmet was made by Hephaestus, Greek god for the fire and the forge.

The power of this helmet is fantastic: It makes you invisible.

This helmet was weared by Athena, when she fought Ares, or Perseo with Medusa. 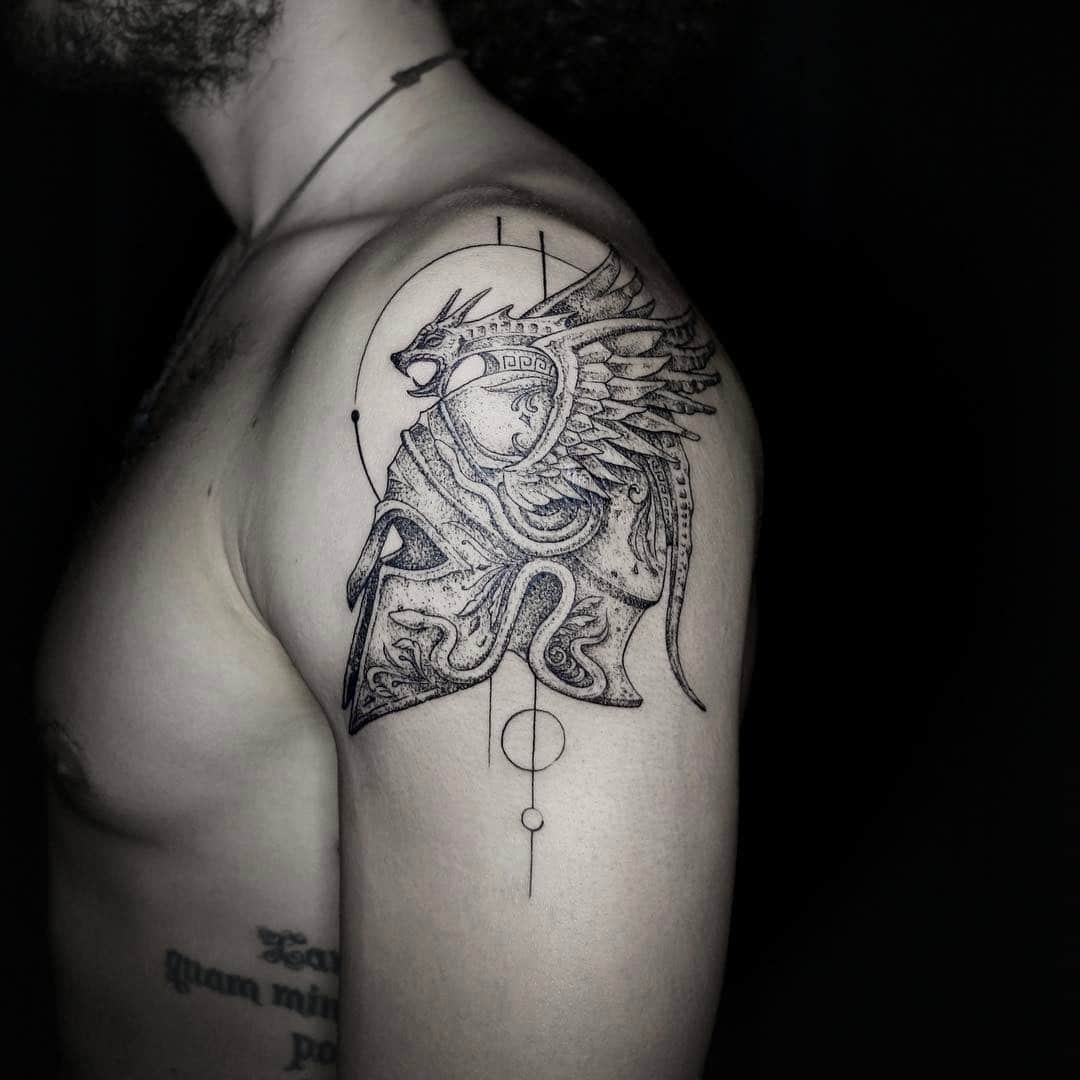 Here is a nice example of a Hades helmet tattoo, in a realistic style.

The good point is you can represent this helmet as you like, sometimes with a dragon, maybe with a skull, some horns or an eagle if you want (or whatever animal or concept is in your mind, really).

This perfect tattoo is done by Emrahozhan, a very talented tattoo artist in The Base, a tattoo studio in Brooklin, New York, and you should follow him right now!

The second symbol we want to introduce you is the cornucopia.

This odd name is something like a horn filled with something, usually food or money/jewels.

Cornucopia is the symbol for abundance in the Classic World.

But how Hades, the underworld God, can have the cornucopia as a symbol?

This represents the soil, the ground, is fertile and can provide you all you need to live.

Yes, one of the main symbols for Hades is something as odd as a cornucopia.

And a cornucopia is what you can see in this tattoo!

Just a horn filled, in this case, with a lot of different kinds of food and flowers.

This is the classic representation of this symbol, but you can fill it with gold, jewels or whatever is in your head to represent abundance (kittens, maybe?).

The tattoo is done by Rebeca Roots, a wonderful woman tattoo artist working at Sacred Roots Atelier. She has a lot of awesome designs (we love her linework, patterns and ornamental ones) and we think you should follow her right now!

Another symbol for Hades is the two prong pitchfork as the main weapon of this god.

The story is quite interesting, it seems this weapon was forged again from the Poseidon one, once it was broken. 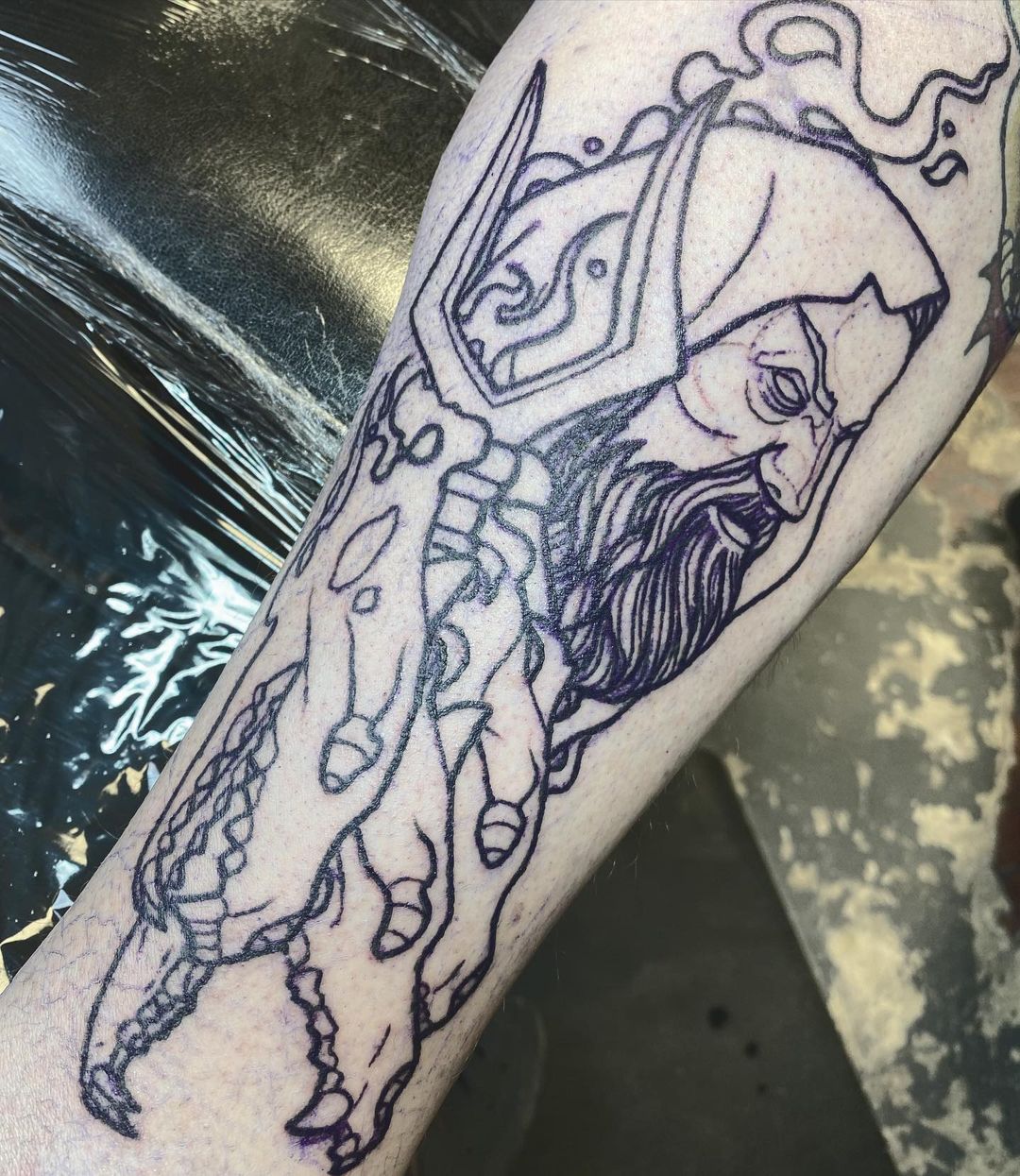 Every Greek God has a weapon, and Hades’ weapon is the two prong pitchfork.

Sometimes these two prongs are equal, sometimes one is bigger than another, but the symbol is there.

This tattoo is made by Kim Scott in linework and illustration style, and we do like it because, with only a few lines, you can feel the power of Hades.

Kim is a fantastic woman tattoo artist working at Heart&Dagger Tattoo, in Odessa, Texas, and we do like her tattoo style!

Usually Hades is represented with a vessel too, but a special vessel to make libations.

A libation is the act of offering some liquid to a god by dropping it to the ground (in case of Hades) or an altar in case of other gods.

In the case of Hades, the libations were direct to the ground so the liquid can go to the underworld to satisfy Hades.

Some more Hades Tattoos for you

We do like to insert some Hades designs in the guide, as you have sawn in this one, but we do like more to have a final part with a lot of designs for you. 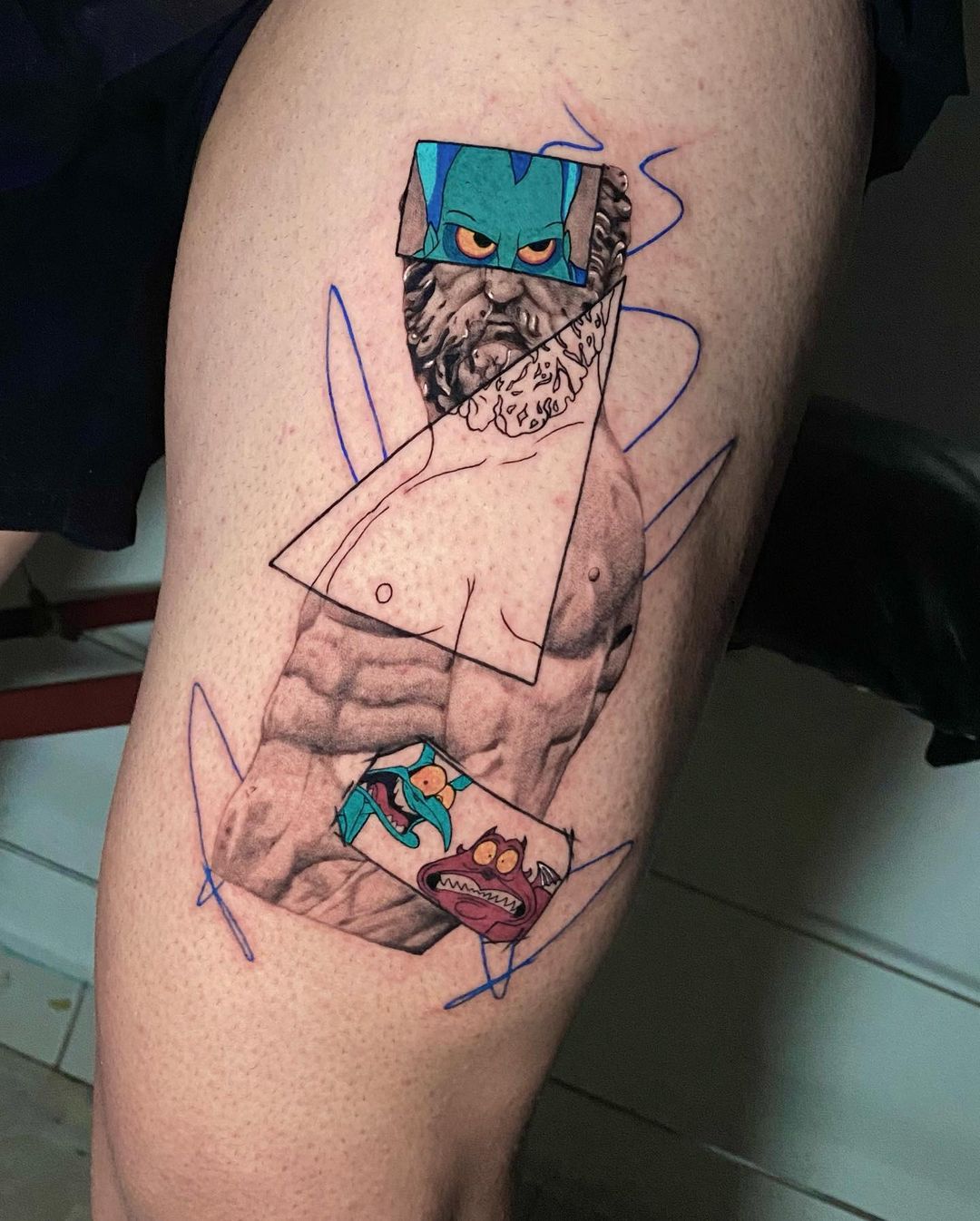 And now, something a little different, isn’t it?

This time, it is a mixup of tattoo styles done like a master, because the final result is awesome.

In this tattoo you can see cartoon, illustration, realistic and linework style for an unique piece of work!

This tattoo is done by Jay Jay Tattoo, a very talented tattoo artist with a nice and very personal style. 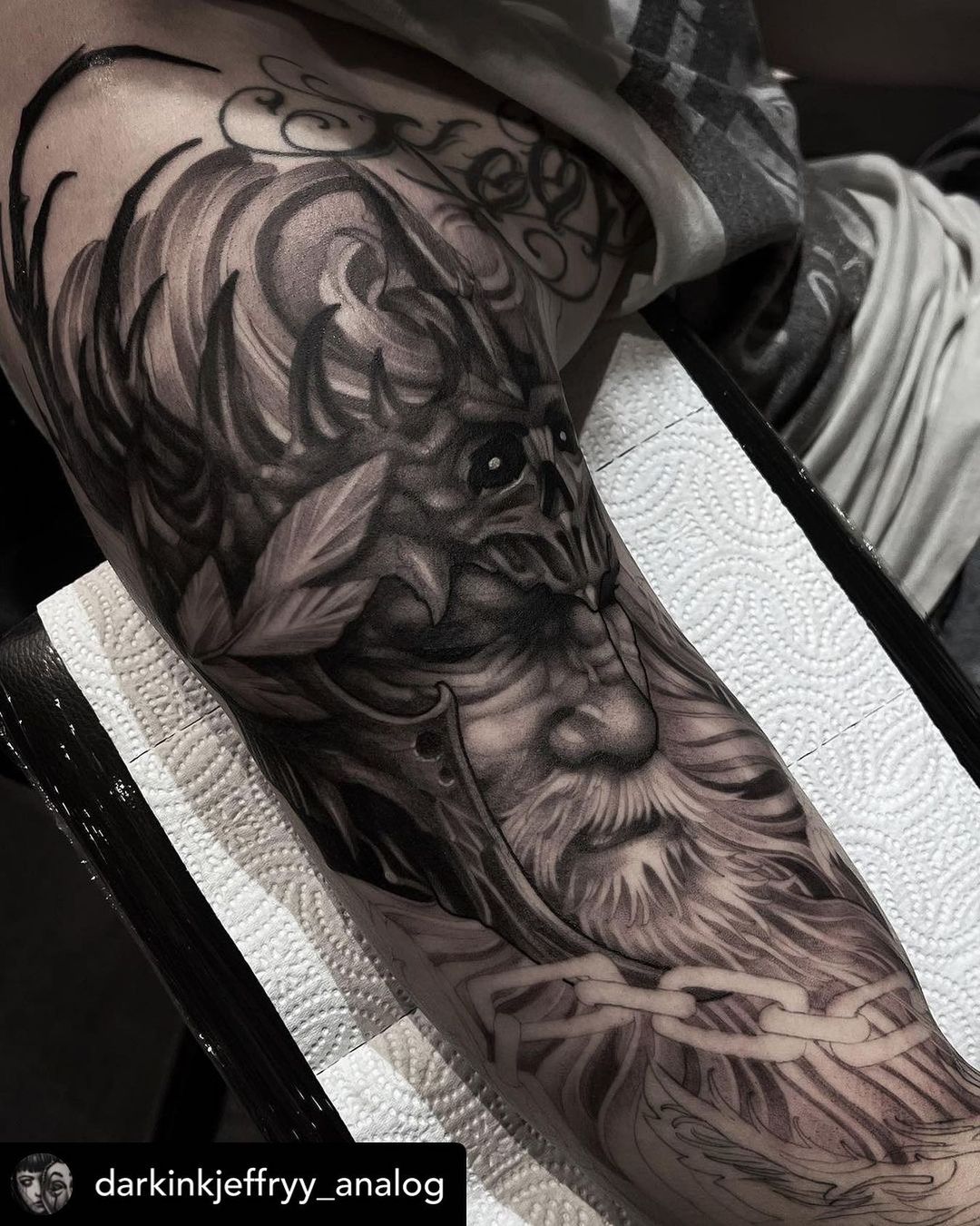 Let’s move on to the next one, more classical and ceremonial.

Here you can see another realistic Hades tattoo, this time looking down with close eyes like being in a ceremony, isn’t it?

The tattoo is done by Analog Tattoo, based in Taiwan, and you can see a lot of wonderful pieces at their Instagram account!

Another masterpiece, isn’t it?

Here you can find another Hades realistic style but, this time, it is like drawing and Hades statue, with Cerberus and a Greek temple too, with a magnificent result.

The tattoo is done by Cosafina, a Tattoo Parlor in Barcelona, Spain, which has been open for more than 10 years. 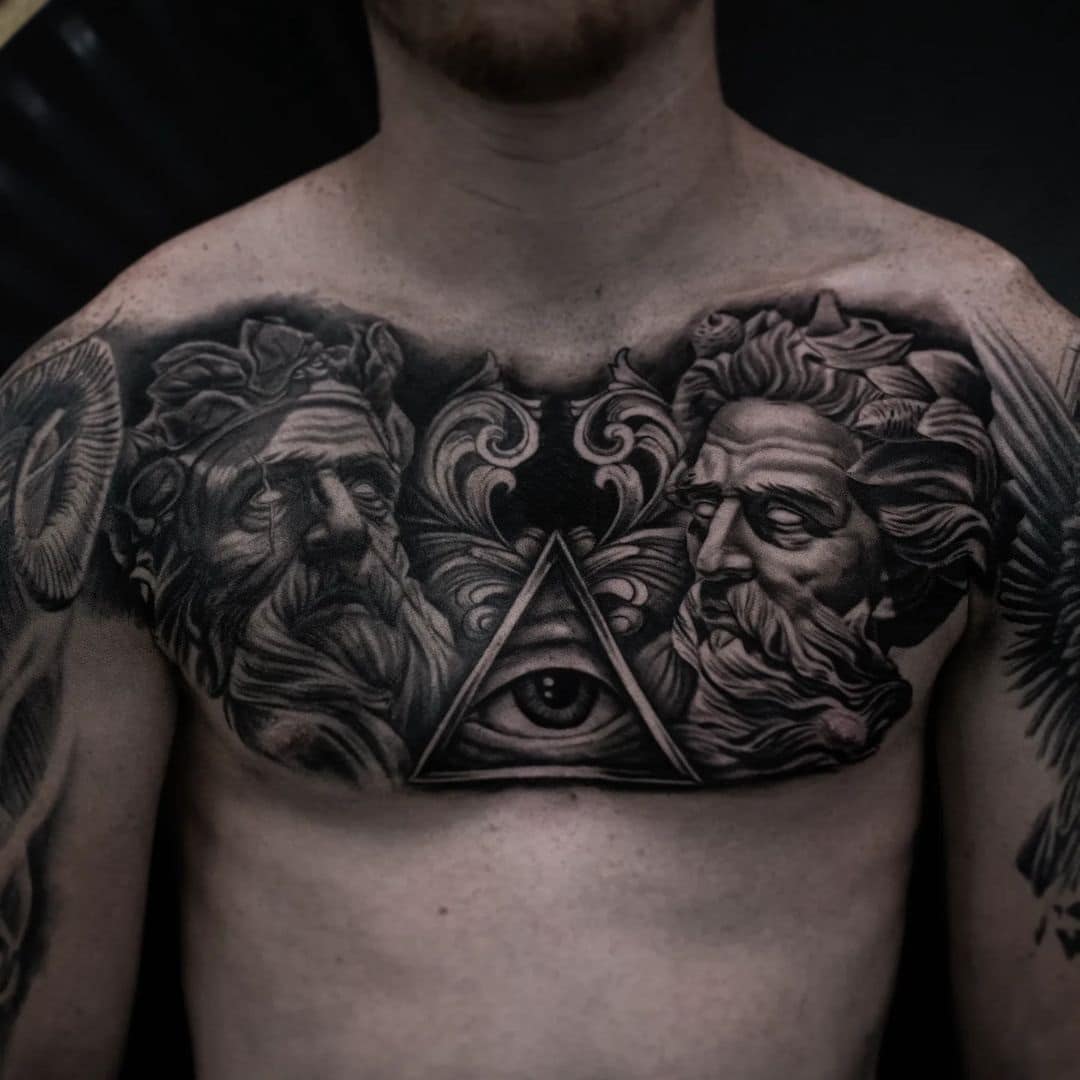 Yes, if just a Hades tattoo has a lot of symbolism, this goes up when you get inked with another Greek tattoo, especially like Zeus.

Hades and Zeus were brothers, and we told you at the beginning of this guide, Hades, the Underworld God, and Zeus, the Sky one, just up and down you.

The tattoo is a masterpiece from Micheal Hitaua, and we do love this work, nice one! 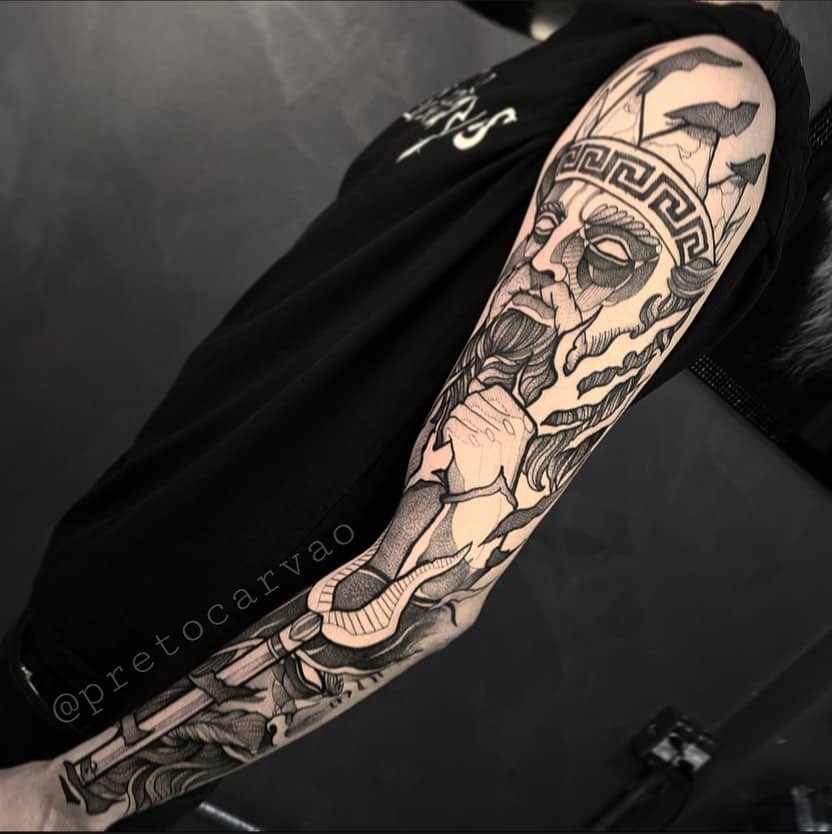 And now, just move on to illustration style, like this one.

A fantastic Hades tattoo with bold lines, perfectly done by the tattoo artist, with tons of personality and, moreover, the famous two prong pitchfork.

This tattoo is made by Preto Carvao, a wonderful private tattoo studio in Brazil. 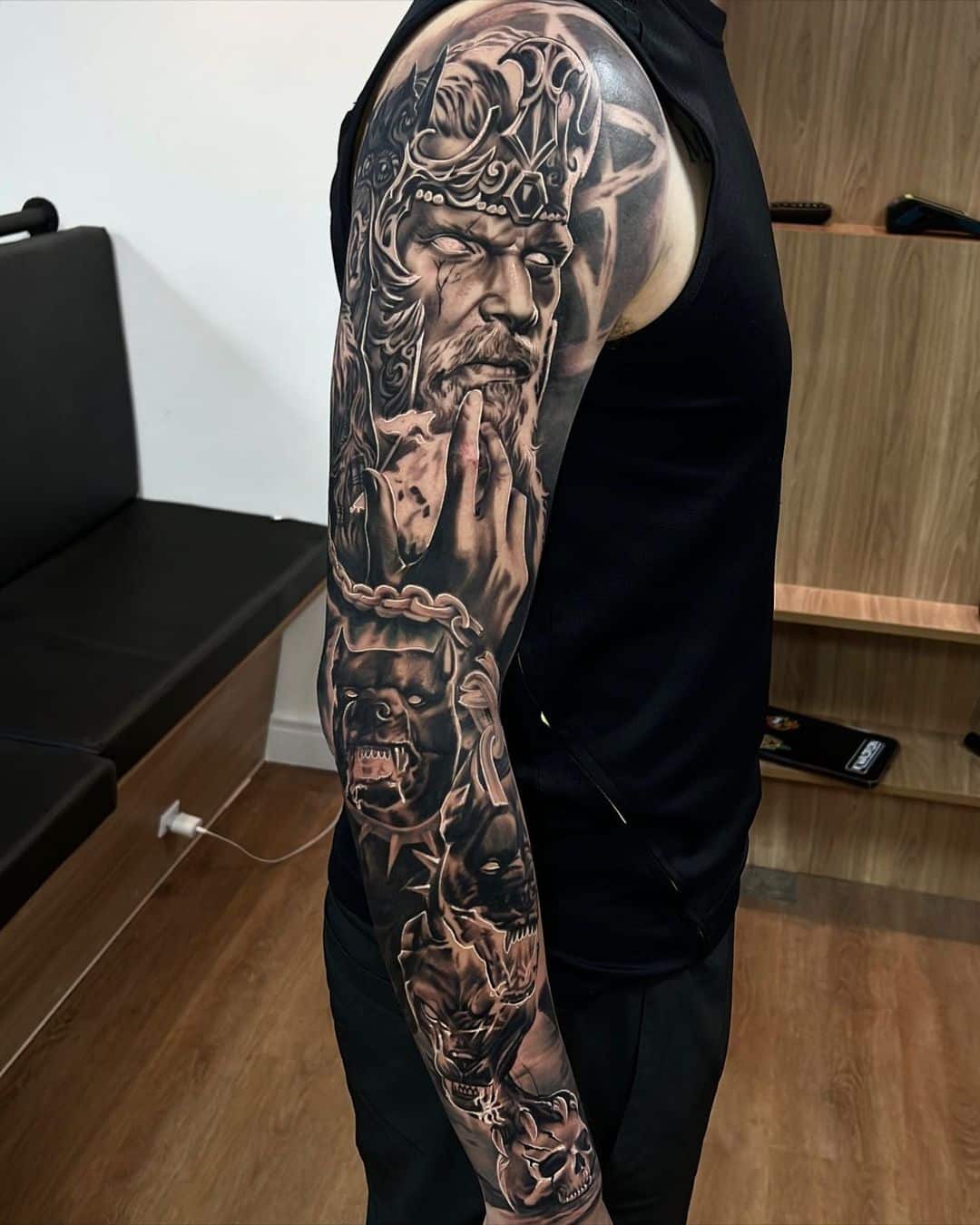 Another realistic one, this time, it is more hyper realistic because of the detail level.

Up you can see a very serious Hades character, with a very angry Cerberus below him.

We do like the detail level and the harmony of the composition, it is a very nice work.

The tattoo is done by Jotabê Tatuador, a fantastic tattoo artist from Moema, in Brazil, with tons of realistic tattoos.

And you complete this guide about Hades Tattoo, did we inspire you? Let us know in a comment 🙂