If there is something universal in mythology on both sides of the ocean are the dragons, and in this guide, we want to delve into them, especially in Japanese and Asian dragons.

Therefore, in this guide you will find: 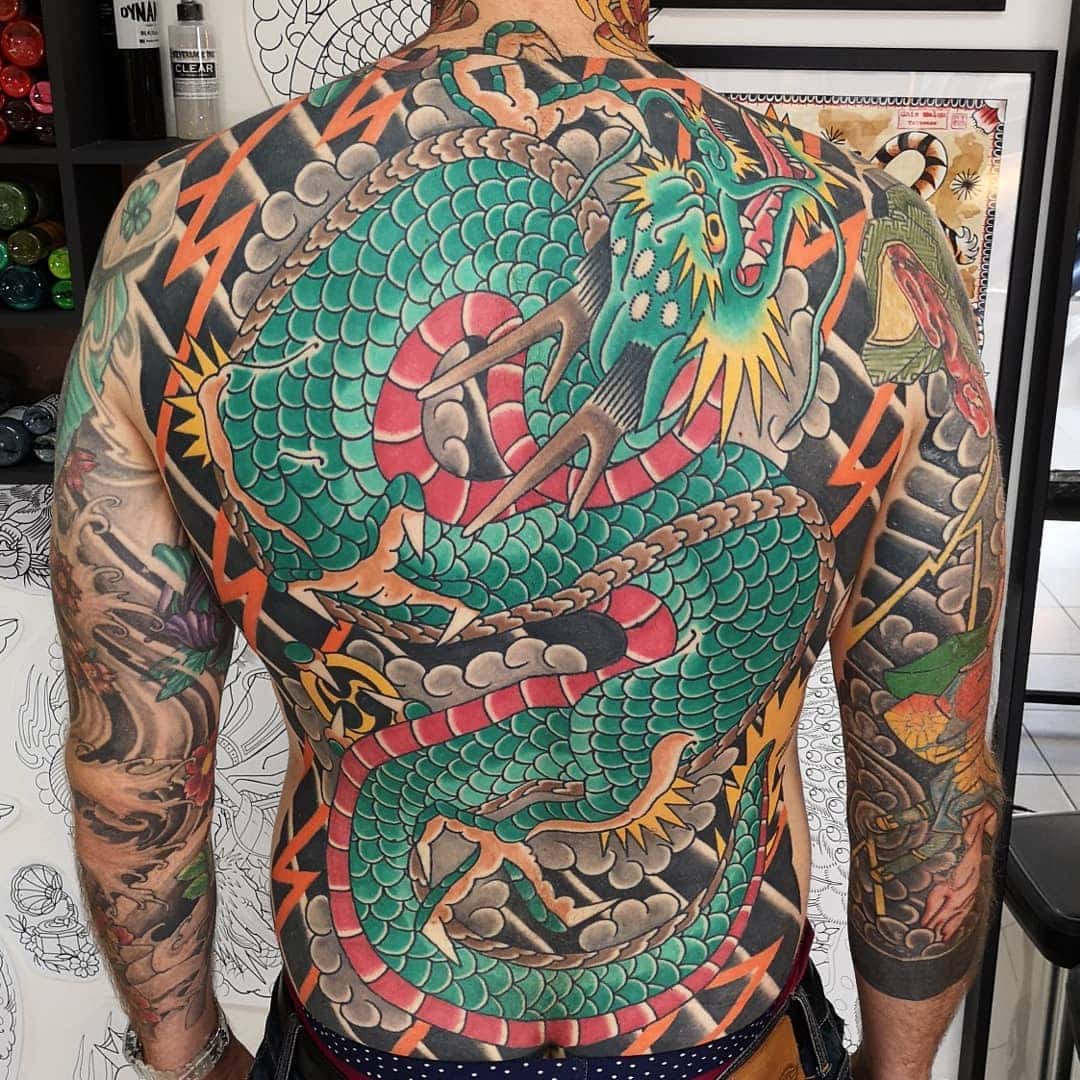 First, we want to share with you a huge design made by our beloved Ghis Melou.

This tattoo is a green dragon on an entire back and you can see all the elements of a Japanese dragon tattoo.

Ghis Melou is tattooing in Montpellier, France, and you should follow him right now!

Here you can find a Japanese tattoo in the entire back, only in black ink.

The tattoo is made by Jesse O’Brien, in Queensland, Australia.

Before we delve into their meaning, let’s start with the basics.

The concept of Western and Asian dragon is very different, and these differences are the first ones you should know.

While in Western mythology dragons are usually the bad guys in the movie, big, greedy villains, tremendously strong and powerful, in Asia it has a connotation that, we could not even say that it is antagonistic, it is simply different.

Throughout Asia the dragon is closely linked to the Taoist concept of yang, the dark part of the symbol.

I know it can be a bit confusing, as Asian and Western symbology are far apart, but the dragon is one of the two great symbols throughout Asia and, of course, Japan.

If you are curious, the other great symbol would be the Tiger, which symbolizes yin.

With the characteristics I was telling you about earlier about what the dragon means as a concept in Japan and other countries, dragon tattoos are usually supported by the concept of balance and adaptation, but, as always, there are many nuances to this. 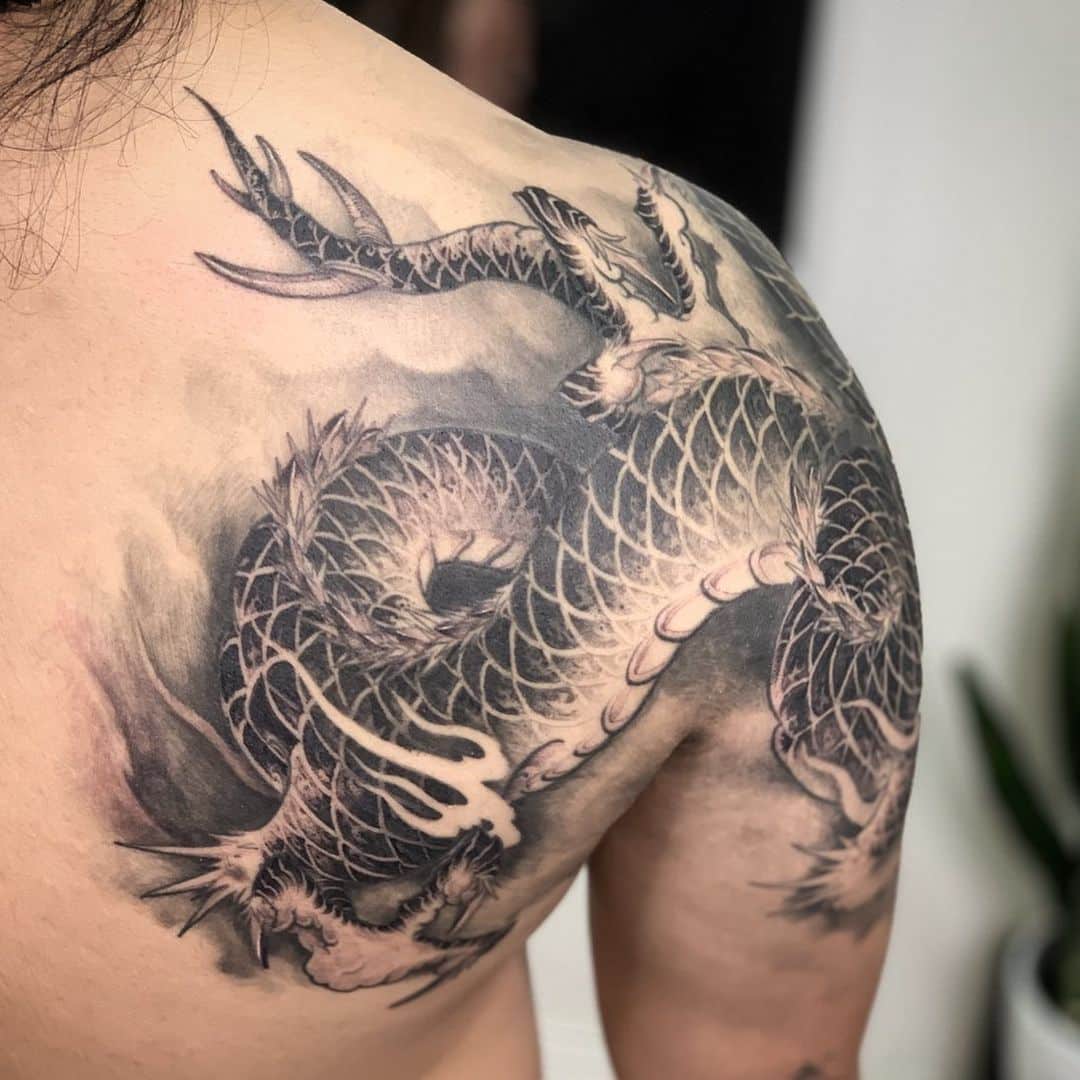 And here, and hyper realistic japanese dragon in black and grey with an amazing design.

The work is made by Danny Ong, from Toronto, in Canada.

And now, the different meanings of the dragon in Japan

The dragon as a symbol has many variants, something that usually happens in Japan and all over the continent.

So much so that we have differentiated the meaning of dragon tattoos according to 3 different concepts: 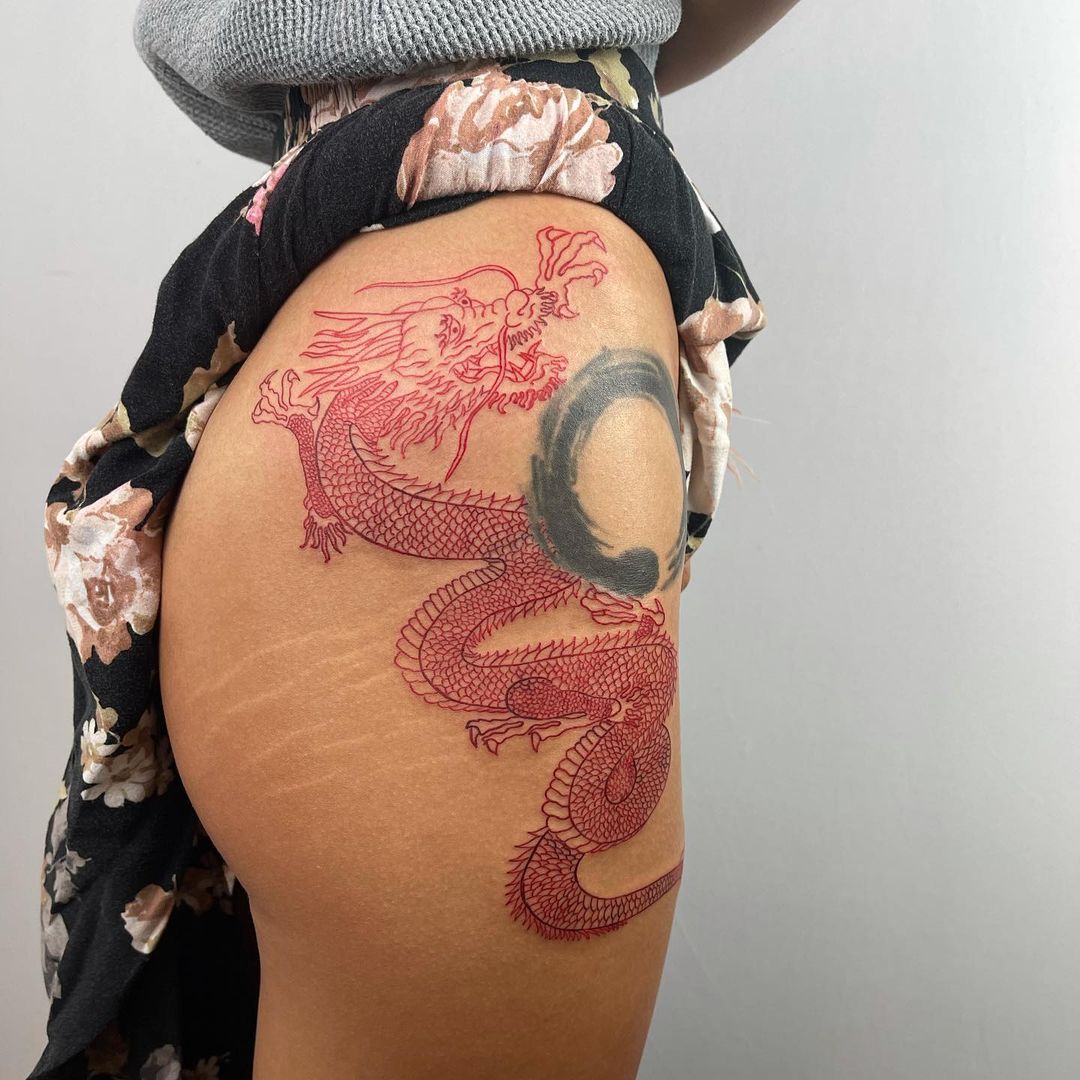 This is another one, this time a red Japanese tattoo only in linework with red ink.

No shadows, nothing more.

It’s made by Hosni OZ, from Lebanon, tattooing in California and Texas.

Meaning of dragon tattoo by color

Five are the main colors of dragons in Japan, and here you can find all the explanation about what does it means:

It is the color that has to do with the earth, nature and, to some extent, spring (although purple or pink is also often used for this).

It is usually related to small or minor dragons, that is, not the most powerful ones according to mythology, but equally important, making it a great choice.

In fact, in one of the biggest manga and anime in history (Dragon Ball), the dragon itself is green, with horns.

Yellow is usually associated with people who are focused, self-confident and like to help.

You should keep in mind to distinguish yellow from gold which, although similar, have their differences.

This color has a part very attached to the western symbology, as it is closely related to the upper class as it is the color of gold, but also other not so well known as wisdom or being a nice person who cares about others.

Blue is the color of respect, forgiveness and being diligent, ready to do things quickly and well.

This color is very far from the concept of calmness (or sadness) that we have in Europe and America.

The color black has a very strong symbolism in Japan and throughout Asia, and is usually associated with values that have to do with wisdom and ancestors, something of vital importance in Japanese culture.

We do love this one.

This neo Japanese tattoo style dragon is fantastic, a huge design with a lot of details, perfectly finished.

This work is made by Grand Kub, and he tattoo in Nantes and Bordeaux, in France.

Now let's go with the dragon according to its Asian typology

In total we want to highlight for you 8 different types of dragons according to their characteristics, let’s see what you think:

Yellow dragons: they are usually hornless and have to do with knowledge as a concept.

Treasure dragons: As in the West, they are the guardians of the treasures of gold and precious stones, as well as other valuable things. The difference with the Europeans is that they are not usually greedy.

Horned Dragons: They are the most powerful of all. Again, try to remember Dragon Ball, and yes, it had horns.

Chinese Dragons: They usually symbolize power and strength, but also fear. They are very powerful dragons and more oriented to the yin side, although they are still dragons, of course.

Spiritual dragons: These must do a lot with nature, as they are considered the guardians of the wind and rain, which they have under their control. In a society that was very attached to agriculture, they are of vital importance.

Coiling dragons: These are the dragons that live (and rule) in the oceans. They are also very important in the whole coast and seafaring culture, of course.

Earth Dragons: This concept is shared between Japan and China and, unsurprisingly, they are the guardians and controllers of the earth and its resources, as well as the nature of everything that takes root on the land.

Celestial Dragons: They are the guardians of all that is divine, of the sky and the gods and, therefore, very powerful. 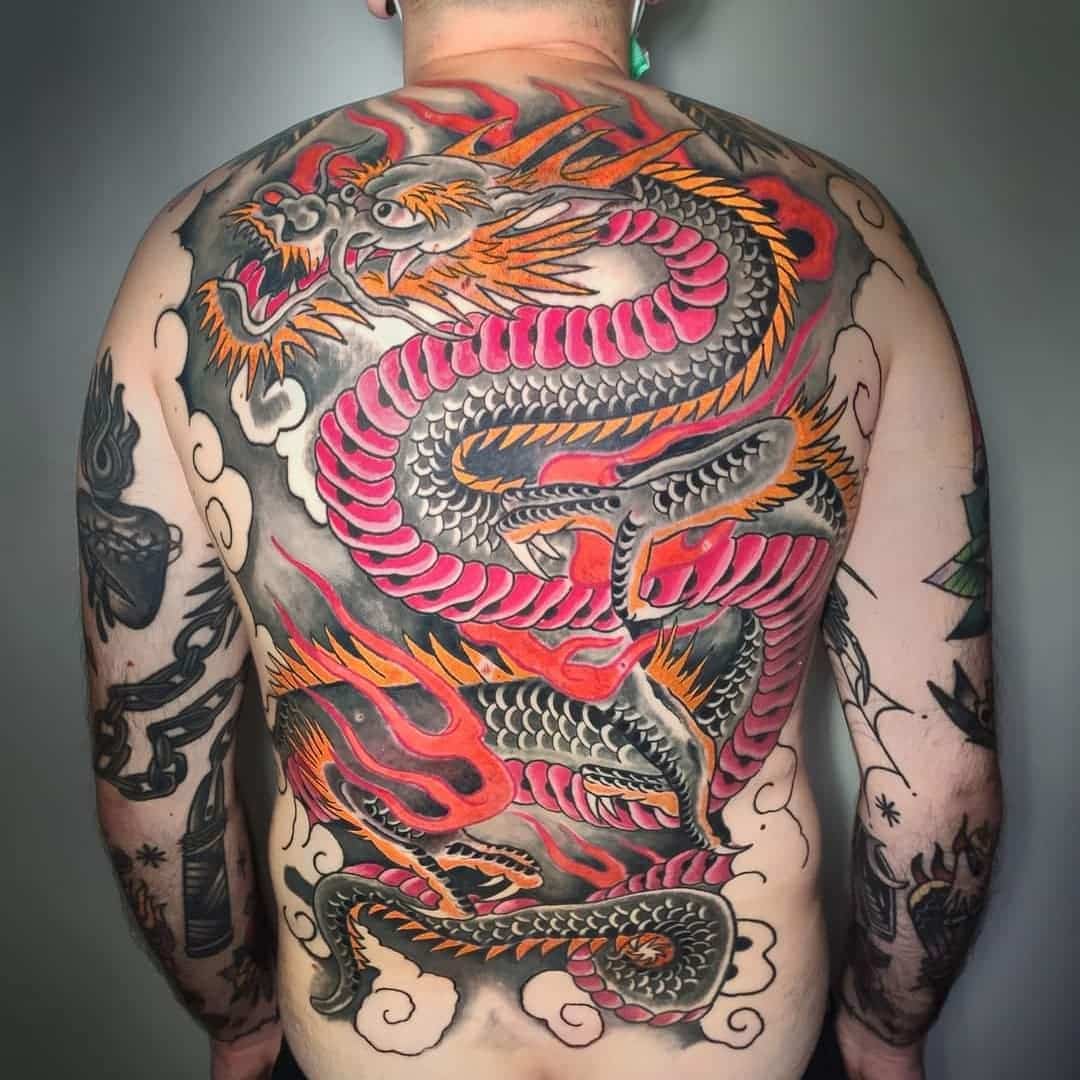 Here you can find a spectacular dragon color tattoo made by Sara Samez.

This amazing design is perfectly done, huge size, and we do love it.

She is tattooing in Italy, and you should follow her!

The 6 dragons of Japanese culture

Finally, there are the 6 typical dragons of Japanese culture that, together with the other two concepts, give you the overall idea of the dragon you can tattoo.

Let’s go one by one.

Kai-Ryu is the first one we want to show you. It is smaller than the rest, some of them are less than 2 meters long, with a bright red color that attracts a lot of attention and, due to its small size, even more fierce and voracious than the rest.

Han-Ryu is the second on the list and, unlike Kai-Ryu, is the largest of them all, with lengths of up to 2 kilometers (about 40 feet, even more).

Bi-Ryu is perhaps the rarest as almost nothing is known about it. Its worshippers say it is the dragon with the best eyesight of all, but there is little more we can tell you.

Hai-Ryu is the most advanced form of all dragons and is known as the “bird dragon” because it has wings. Although it is a Japanese dragon, it is an evolution of Chinese mythology.

Fuku-Ryu, the good luck one

Fuku-Ryu is another Japanese dragon, and one of the most tattooed, as it is famous for its good luck, being represented in gold. It is usually kept in stores and companies to provide good business. 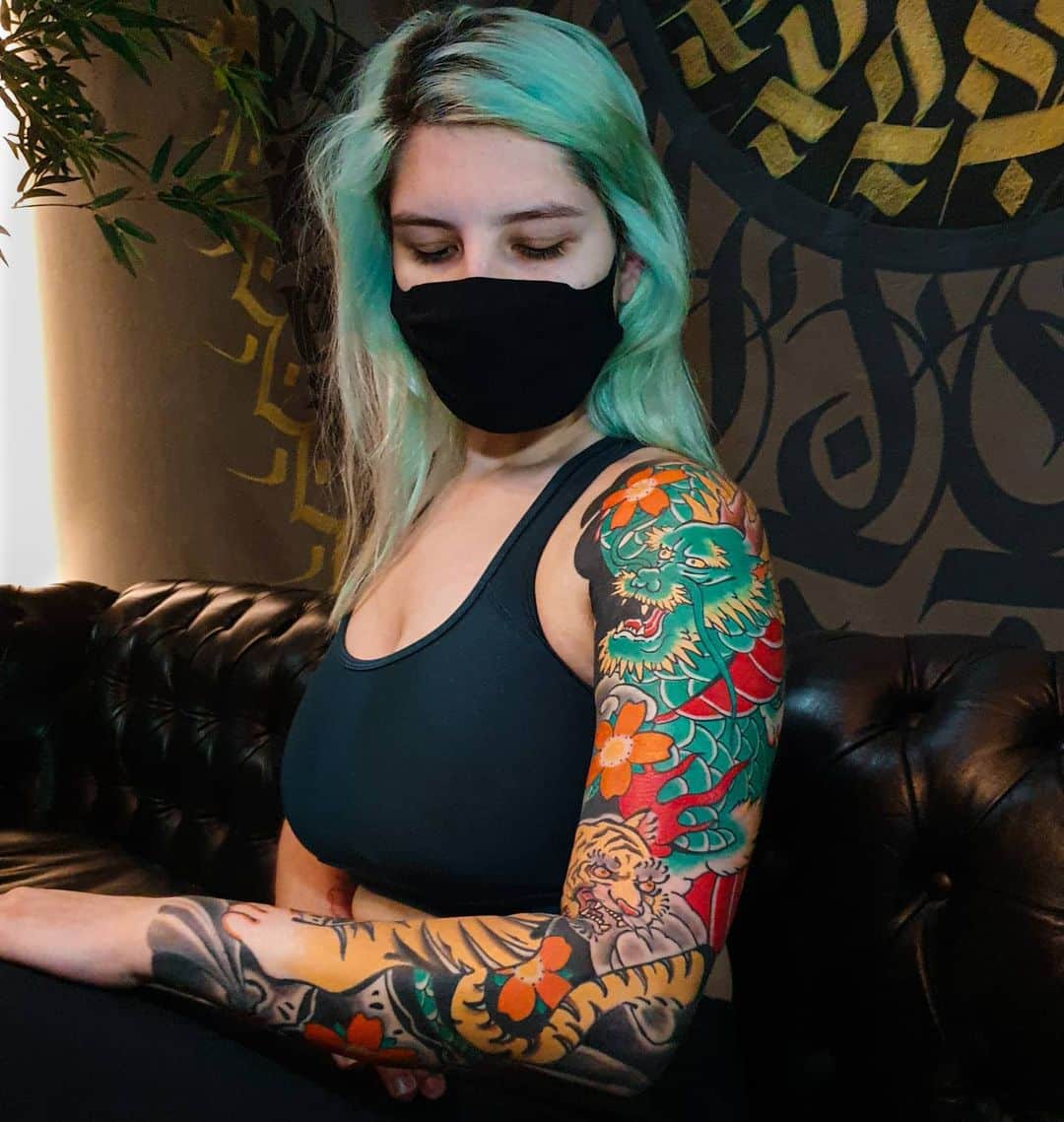 This colorfull design about a dragon and tiger tattoo in the entire arm is a fantastic example of neo japanese style.

The design is made by Marcus Rocha, in Porto Alegre, Brazil.

Here is the end of our guide about the meaning of Japanese dragon tattoos, we hope you liked it and that you tell us how your next tattoo will be in the comments.

Finally, here you can find another amazing design, this time, a black (and huge!) dragon on a entire leg.

This tattoo is made by Mark M Tatts and it’s just perfect!

Some FAQ's about Japanese Dragon Tattoos

What is the meaning of a Japanese dragon tattoo?

Mainly, flexibility, but there are 6 different Japanese dragons, with different characteristics and different colors. You may mix the 3 concepts to have the total meaning.

Can you get a Japanese dragon tattoo?

Sure, it’s possible to have a Japanese dragon tattoo, but you need to find the correct tattoo artist specialized on Japanese tattoo, this is the point.

Is it disrespectful to get a dragon tattoo?

Tattoo connotations depends on the country but getting a dragon tattoo is not disrespectful at all.

What does a dragon yakuza tattoo mean?

Is not only the dragon itself, but you may also focus on the direction (ascending or descending), the number or claws, color, horn or hornless, etc.