How is tattoing in South Africa? Talking with Embla Holm

Today we talk with Embla Holm.

She is a woman tattoo artist from South Africa. She is passionate, direct, and we don’t know if we love more her tattoo artwork or her personality.

And that’s a thing, we are sure of that!

We have talked with Embla about the tattoo situation in South Africa, and we are completely sure that you are going to enjoy a lot with this interview, because this country is maybe one of the less known in the tattoo world.

Here you can find Embla thoughts about the past, present and future of tattoos in South Africa and, moreover, some other tattoo artists recommendations, in the country and all over the world. 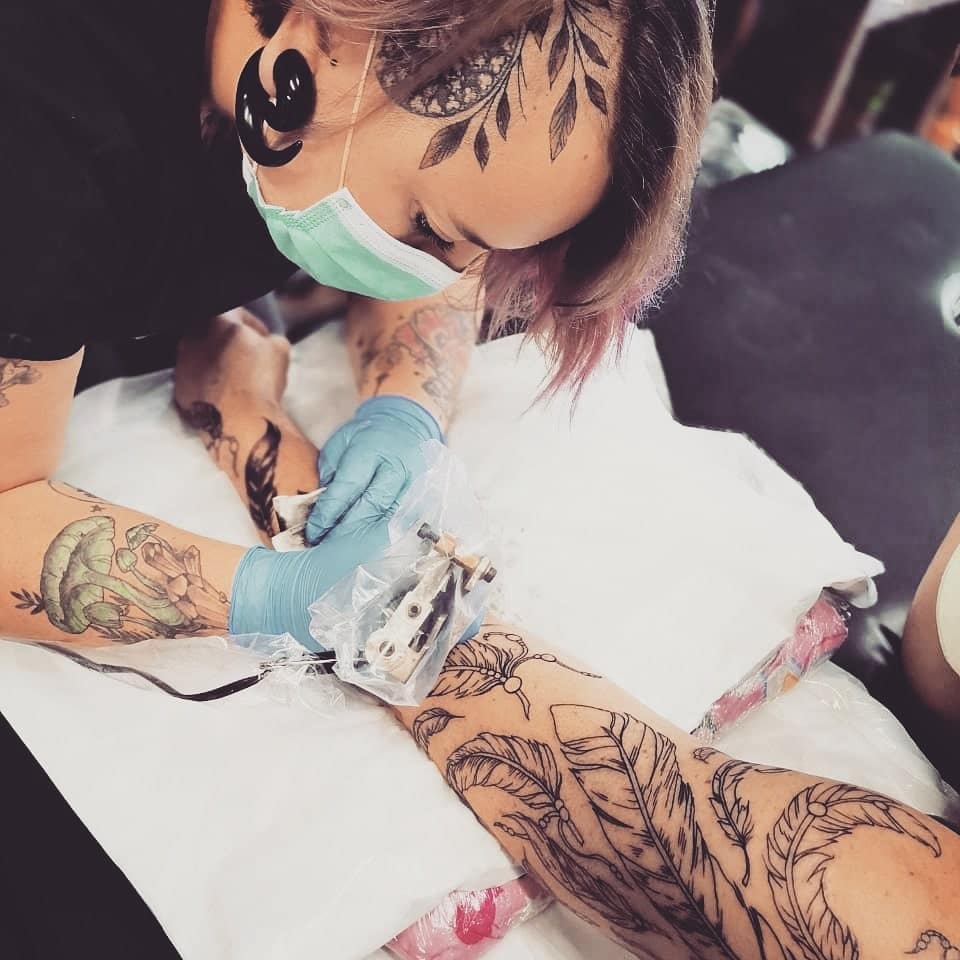 Please, tell us a little bit more about how the relationship between South African people is with tattoos.

The views of South African people, in regards to tattoos have changed quite a bit over the past few years.

South Africa in itself is a very conservative country. So in past years tattoos were associated with delinquent and criminal behaviour, biker gangs and ruffians.

It was unacceptable to have tattoos from a societal viewpoint.

However, in recent years, as the popularity of tattoos as an artform, has grown within the younger generations in South Africa, the view point has changed somewhat. It is now acceptable to have tattoos and is a sought after art form. 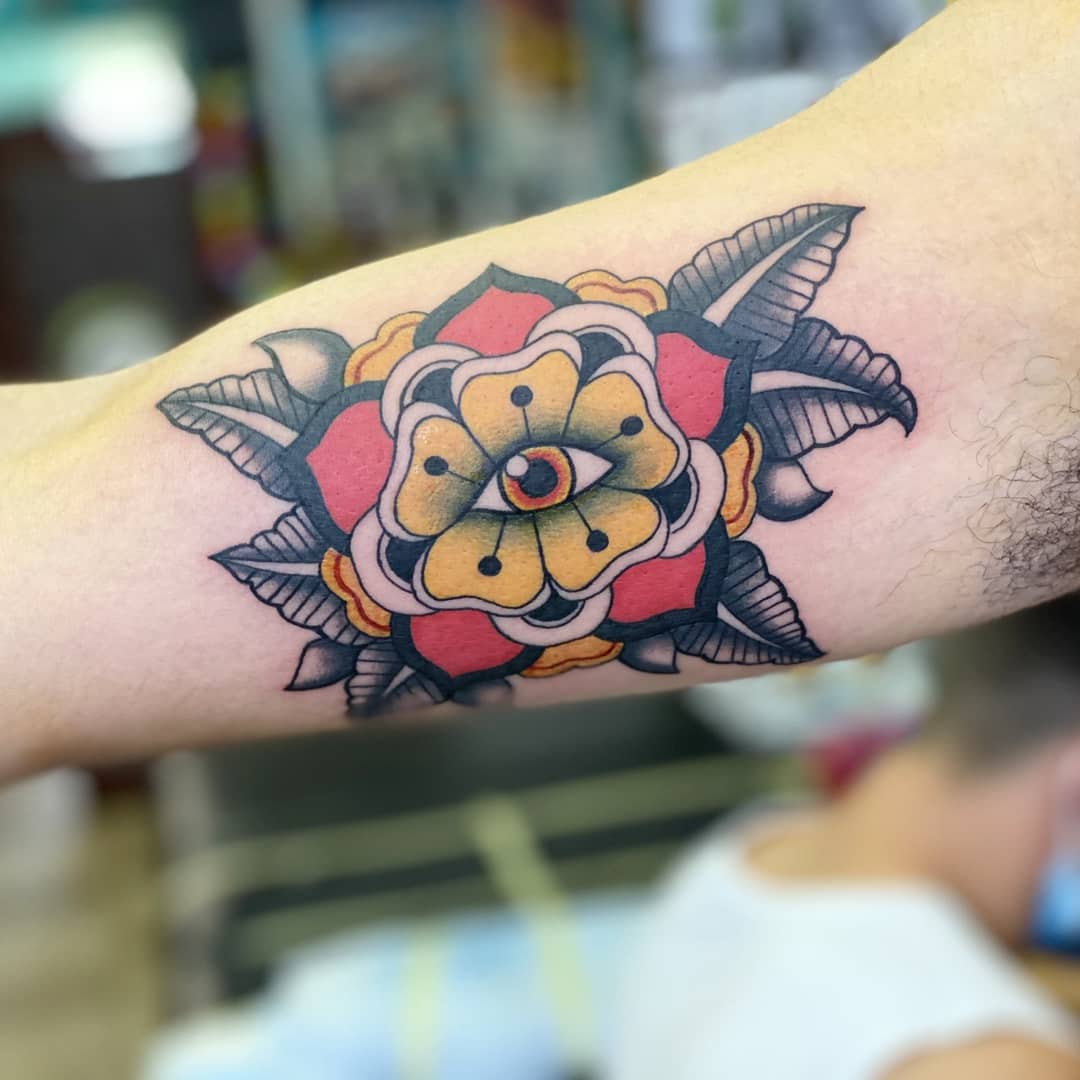 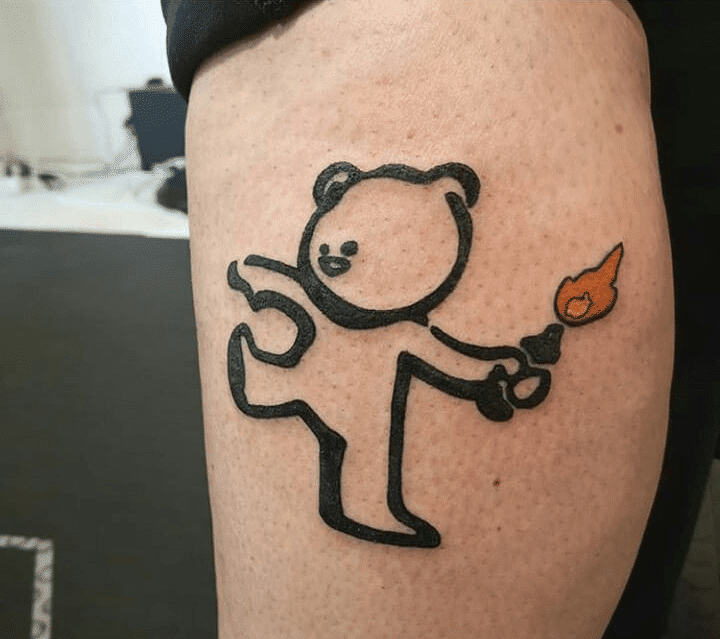 Do you think there is an special South African style or mark for tattooing?

Modern/current day tattooing in South Africa is very much inspired by Western Tattooing.

The same popular styles and techniques that are found in most of the Western World can be found in South Africa.

However, looking back through the history of our country, some of the tribal people like the Koi San have used the art of tattooing as a rite of passage for their young boys.

The rite of passage was the killing of their first animal, usually antelope. They would then use the fat of the animal, combined with various herbs and minerals to make an ink.

Thereafter lines would be tattooed across their arms, chest, back and between the eyes (over the nose). This tribal tattooing could only be performed by the tribe Shaman/Holy man. As it was a sacred rite.

Other indigenous tribes in Southern Africa focused more on Scarification and the stretching of various body parts like the ears, lips and necks, rather than tattooing.

For the most people in the world, South Africa traditions are not well known. Please, tell us a little bit more about tattoo tradition on this beautiful country.

The tattoo traditions in South Africa are mostly based on Western Tattooing, which was originally (excluding tribal tattooing, e.g. the Koi San) brought here by the British and Dutch sailors in the 18’00’s and early 19’00’s.

A tattoo artist was only allowed to tattoo if they belonged to the biker gangs and abided by their rules.

It was extremely difficult for independent tattoo artists to practise the craft as equipment and materials were very scarcely available. Tattoo equipment was only imported to professional studios, with international connections, which were mainly gang controlled.

In later years the interest in the arts and tattooing grew in the South African public eye. And with tattoo equipment more easily available, due to registered tattoo suppliers, more independent artists could open studios across the country.

Eventually, the biker gangs had to relinquish control.

A lot of artists and studios still uphold some of the ‘old school’ traditions of tattooing, stemming from the tumultuous biker gang era.

But many have embraced more modern traditions and outlooks on the industry. 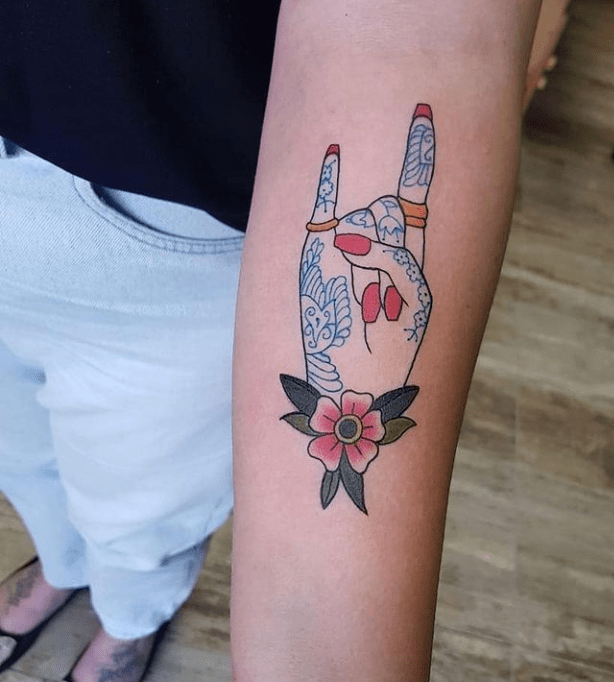 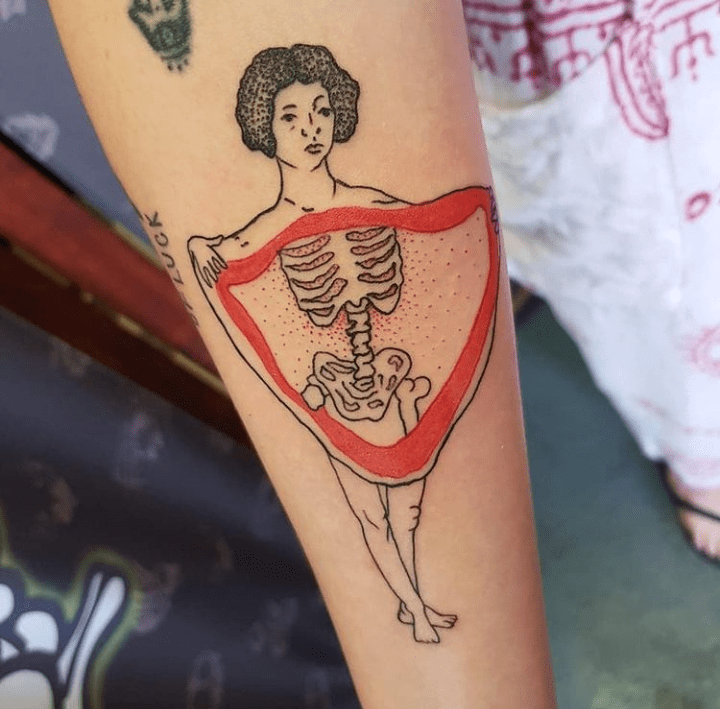 How is a day for a woman tattoo artist in South Africa? How feels the society about women on this artwork?

In South Africa, the tattoo industry is without a doubt a male dominated industry.

It is very difficult to gain a foothold in the industry as a woman. Many studio’s are not fond of hiring or offering apprenticeships to women.

However in recent years, the industry has thankfully had an influx of highly skilled female artists, who have had to work extremely hard to build successful careers.

As female tattoo artists we often deal with a lot of archaic sexist viewpoints, often from clients.

For example: A male client would walk in and request to consult an artist, and they, because you are a woman, expect you to be a receptionist.

When you then inform them that you are an artist, they will ask if there isn’t a man that can help them. Which is frustrating as a woman, because often we possess an equally impressive skill set as our male counterparts.

But for a lot of men in South Africa there seems to be a perception that women aren’t tough enough or ‘bad ass’ enough to be tattoo artists.

In terms of the public/social viewpoint on either female tattoo artists or just tattooed women, it can be quite negative.

Heavily tattooed men seem to be more acceptable than heavily tattooed women. Men would get stared at or harassed less in public areas like shopping malls, than their female counterparts.

Did it evolve in the last 10 years? How do you see the future of tattoos in your country?

Yes, I would say that the industry has evolved over the last few years.

Looking at the history where the industry was under biker gang control for the longest time to now, where it is more publicly accessible, is an evolution in itself.

I also think the Internet, tattoo shows, and social media access in the modern day has led to information on various styles, techniques, and equipment to becoming widely available. Thus the quality of work and the idea of what is possible has grown so much.

It has also created a wider interest into the industry.

So a lot of new talent and skilled artists have emerged due to the influx of people into the industry. It has also led to the improvement of established artists, who have expanded their skillsets to include these newly available styles and techniques.

The evolution in the industry is also due to better/current tattoo equipment and materials being easily accessible through registered tattoo suppliers.

The ongoing change of the public view on tattooing has also contributed to the evolution of the industry. Tattoos are no longer only gang affiliated but rather aesthetic and a sought after artform.

That being said, South Africa is in many ways still very conservative. So, it’s difficult to say what we can be expecting in future for the industry.

One of the biggest problems we face currently, that we hope to change in the future, is the fact that there is no regulation of the tattoo industry in South Africa.

This leads to a lot of scratchers and untrained/uneducated people tattooing in South Africa. Which poses serious health and safety risks, not to mention absolutely atrocious quality of work. 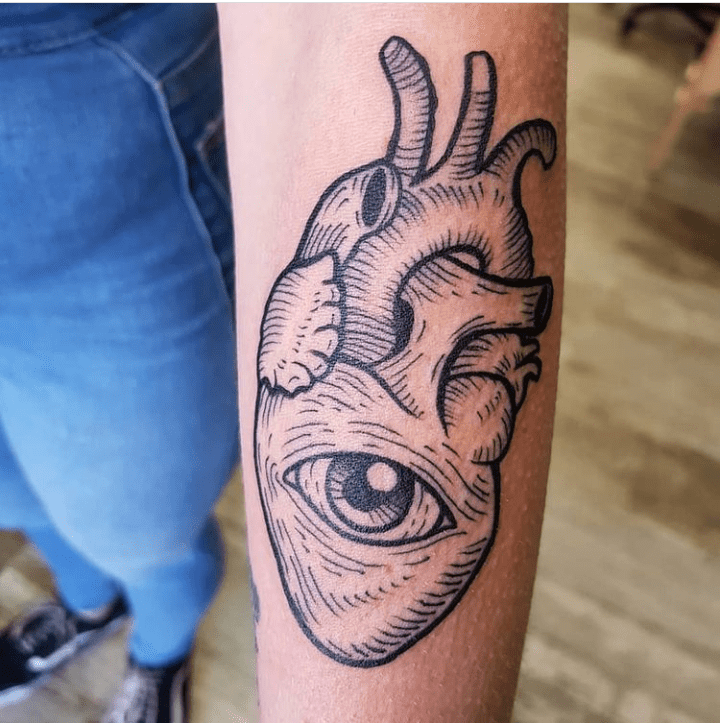 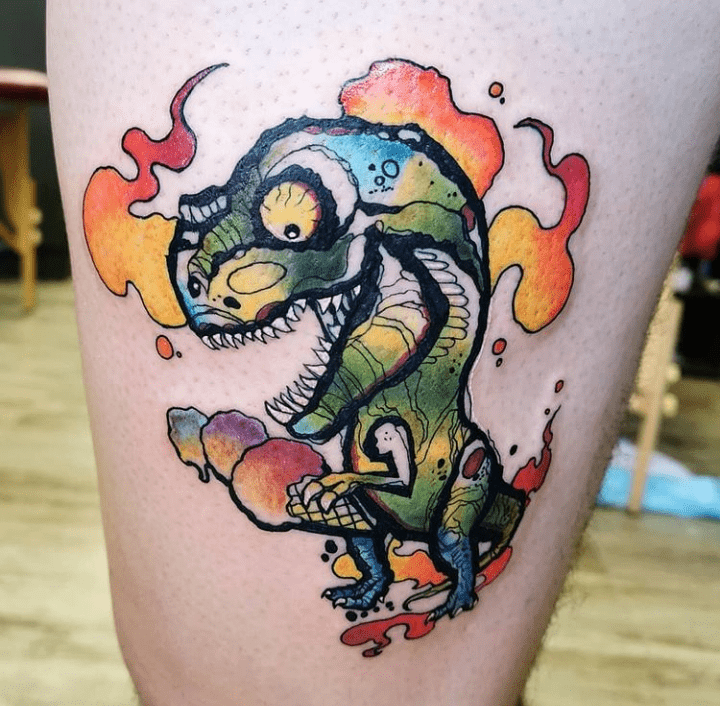 Well, this one is not an easy one: According World Bank, South Africa is one of the most unequal countries in the world, how this affects to tattoo industry and business?

According to the World Bank, South Africa is listed as having the highest wage inequality overall, in terms of the salary that men and women with the same qualifications receive.

This is however is not a problem in South Africa’s tattoo industry, as most artists work at individualised commission rates, dictated by their skill set and years of experience.

Male and Female tattoo artists with the same skill set and experience will be paid the same if, for example, their hourly rates are the same.

The economic inequality in South Africa, however, is huge.

Tattooing is considered a luxury item/ industry. Not everyone can afford to be tattooed.

In South Africa, we charge the lowest possible rates we can, to make it affordable for people to get tattooed. Even though our professional equipment, materials and consumables are extremely expensive, due to it all being imported.

Another problem due to the lack of regulation of our industry, is a lot of scratchers and untrained people tattooing from their houses, etc. at an even further discounted rate.

So a lot of South Africans would rather go to them to pay less, and avoid paying professional studio prices. This also leads to serious health and safety risks, as well as atrocious quality of work.

It is a struggle for tattoo artists in South Africa to survive, as we can’t charge what our work is truly worth or charge for the time we put into it. Since people can’t afford it. And competing against scratchers prices just makes it that more impossible.

Financially it is not lucrative for us to be tattoo artists. We do it for the love of the tattoo craft in South Africa.

Please, recommend us some women tattoo artist from South Africa and in other countries you follow 😊